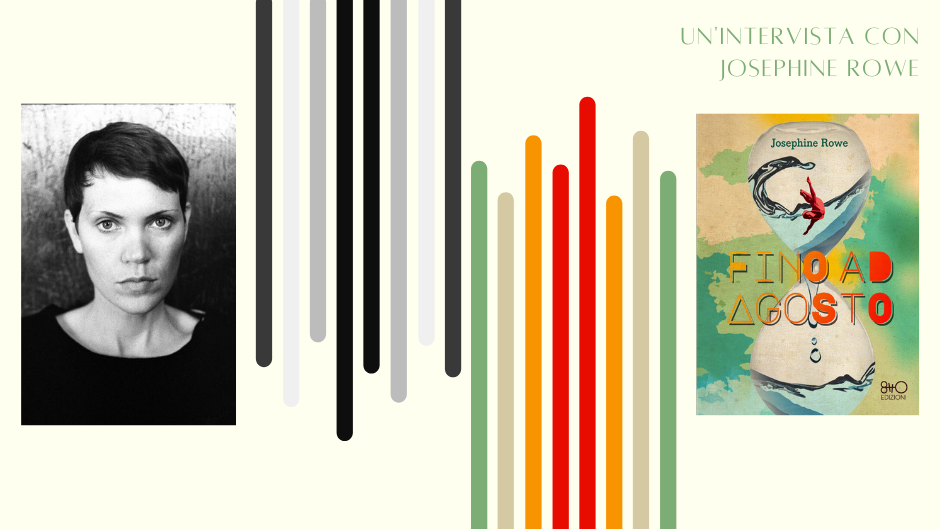 I’ve always liked aftermath stories—those in which the blockbuster event has already happened, or happens offscreen, and so the narrative takes its shape and force from how people cope, or fail to cope. How they change, or fail to change. The same goes for places, the landscapes themselves—what is carried forward, what is “remembered” and legible afterwards, and for how long? What is buried, but still potent. And how the repercussions of these greater occurrences influence us (humans) in ways we are not always attuned to.

Maybe it’s more correct to say: not aftermath exactly, but the prosaic interludes between those major upheavals. Those spaces in which major incidents reverberate.

I moved around a lot, in the seven years I spent working on the stories in Here Until August. The stories are not usually autobiographical, but they are inevitably influenced by my time in those places. Melbourne, Montreal, Newfoundland, Bay Area California, Tasmania, New York, and so on. In each case staying at least long enough to have a fixed address, and the way one inhabits a place—the extent to which they notice—when there might be a glimmer of longevity in it, is different to just passing through as a tourist. You feel more accountable. But even as a tourist, each place imprints upon you, to a greater or lesser degree. A person can’t help but be affected, especially if they walk. I walk a lot—I feel disoriented (unwelcome, even?) in unwalkable cities—and I tend to write about a place as a way of orienting myself within it.

In a related sense, I look to writers whose stories I read like maps of these places (if sometimes very old maps, whose topographies have long since been reconfigured). Mavis Gallant’s Montreal, Lucia Berlin’s Oakland, Alistair MacLeod’s Atlantic Canada, to name a few favourites.

Writing for me is a means of navigating new surrounds, and more fully inhabiting them; most of the stories in August have a real-world catalyst that anchors them within a particular landscape or city, but nearly all were written after leaving, at geographical and emotional remove from that place—for instance, writing about coastal Australia from the depths of a Montreal winter, or about the Montreal polar vortex from the height of a Californian summer. (Admittedly, I wrote about the Catskills from the Catskills, in Anything Remarkable.)

It this way, writing also becomes a way of recovering, of re-inhabiting, of leaning into major and minor longings. The distance itself clarifies and sharpens things—we feel something like the immediacy of what we cannot immediately have, or in any case will never again experience in the same way.

I spent half of 2018 in Italy, mostly based in Trastevere, Rome, on an Australian writing fellowship, and of course the city inflected my writing and think, while I quite literally walked the soles off my shoes. But my stories tend to take a long time to “settle”, so Rome doesn’t appear in Here Until August, though it has surfaced in recent essays. The fiction I worked on while there grew into a new novel, instead. So I hope to get back, before too long, for research. And also for the natural wine. And the Casa Manco pizza at the Testaccio markets: I practically lived on that.

I’m a bit wary of using the word trauma too freely, as all the weight and the meaning is too easily worn off it. I understand trauma to mean something that happens outside of the range of ordinary human existence. What so many of these characters are experiencing falls into the range of ordinary human pain—not exceptional or out of any natural order, but nevertheless; deeply impactful, sometimes deracinating.

If one has made it to adulthood without ever knowing any great loss, or true grief… that seems extraordinary to me, and I’m not even sure if I’d count it as lucky, maybe more of an existential shortfall.

These experiences (generally the tougher ones) have the potential to expand and deepen our personhood—along with, one hopes, our capacity for empathy, and for grace. Our sensitivities, which are too often treated as weaknesses. And within those depths that loss or grief carve out, I think one can also have greater reserves for joy, appreciation, connection. (Or perhaps these are the words of someone who feels a necessity to make something of their losses. Grief is not the only avenue to art, but it’s a very well trodden one.)

I would like to think that something of this balance—the joy and wonder and appetites of various kinds—comes through just as strongly in these stories as the hard stuff. But it’s difficult for me to know if that comes across in Italian. So much of the humour and levity, especially in the Australian stories, is in vernacular and slang, and in cultural shorthand. I’m always curious about how that translates in other languages, or whether it gets lost along the way. Perhaps I seem more serious in Italian.

I didn’t find the plunge into these upheavals necessarily difficult, as regardless of how near or far they fell from my own experience, there was always an emotional or psychological inroad. The challenge—and perhaps the plunge!—is more to do with sounding the depths of these protagonists, articulating the specificities of how these particular people, in these particular environs, each responds to their circumstances. And our environments do shape our responses.

I was captured recently by what the critic Dustin Illingworth wrote of Shirley Hazzard, for The Nation—“In each of these stories, the novelty of some transient setting allows pain to separate itself from habit or inattention.”

I thought, Yes, that’s exactly what each of the characters in Here Until August is experiencing, too, though I might never have put it so deftly.

*It very much depends on the story—often they begin with a vivid image, and in the case of many of the stories in Here Until August that’s very often a geographical site, real or imagined (occasionally dreamed), that haunted me for one reason or another. Other times, a story might begin with a very clear, persistent voice that simply won’t let up. In a way, you write to make it shut up.

This was the case with the narrator in Chavez; she kind of took me hostage. The narrative voice is very much hers, but elements of the story extended upon those from my own life: at the time I found it very difficult to leave the apartment I was renting, in a city that was not yet familiar to me. Even the most basic, transactional exchanges with people were a challenge—at the supermarket, for instance. In spite of the difficulty, I had to appreciate the element of the absurd, the ridiculousness of it. Then I agreed to look after a friend’s dog for a few days. He was a big, friendly wolfish mongrel and I completely adored him (his name was Cal) even though I don’t think of myself as a dog person. That responsibility pulled me out of doors, sort of broke the closed circuit I was in. I hadn’t had a dog since I was small. I liked the way he absorbed the bulk of the attention: I realised that a woman walking alone and a woman walking a dog are two very different things. So I introduced a fictional cousin of this dog to the story, to see what effect he might have on a narrator with bigger problems.

Regardless of where and how a story is sparked, though, the writing process is nearly always the same: utter chaos. I’m a very fragmentary, non-linear writer, going back and forth between longhand and laptop and the backs of envelopes (it seems all the best and truest things are scribbled on the backs of envelopes. This is why it’s so important to have a fixed address, even a temporary one.) At the same time, I edit obsessively. I have what could almost be called a pathology when it comes to word choice and the slight variants of a phrase, writing the same sentence seven different ways. I think it’s fair to say I love this part, though; adjusting the weight and torque and eventually feeling the smooth click. Like a carpenter when at last they get everything to hang together without nails.

I wonder if this is a question writers or artists ever stop asking themselves. And whether the answer changes, over time.

There’s the old but very effective trick of working backwards in answering the question “Why write?”—considering one’s own life (and psyche) and then hypothetically removing literature, art, music, etcetera, and seeing what’s left at the end: not enough. And this past year has really only underscored the value of art in our lives.

None of us has ever lived in a time without the global upheavals and threats mentioned above—it just depends on where in the world we’re standing, what we’re born into—although environmentally, of course, the accelerated, exponential losses are becoming too great to fathom.

But to answer this notoriously unanswerable question as simply and honestly as I can: our role is to pay attention. And to enact that attention, to whatever extent we are able. It isn’t enough to eulogise.

A novel that follows a lifelong friendship based upon art and activism, set between Tasmania, Sydney, New York, and Rome.